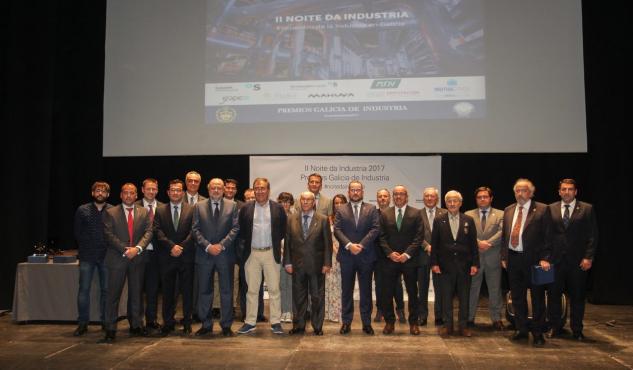 Through its dedication to investigation and contribution to the industrial fabric of Galicia, our Technological Centre for Distributed Energy (CETED in Spanish), was awarded this past 6th of October in the city of Pontevedra with the Galician Industrial Prize in the category of innovation. The award was presented by the Galician School of Industrial Engineers in collaboration with the Association of Industrial Engineers. The award was presented during the second edition of an “Evening with Industry”.

Innovation Director Alberto Docampo, had the honour of receiving this prestigious award during a very entertaining evening which was a demonstration of new technologies from start to finish. In fact, you could say, Alberto received the award in two parallel universes at the same time. How? Well, in the real world of course, and thanks to virtual eyewear from the creative director of Maxina, Carlos Seijo, he also received the award in the virtual world.

After this more than original way to present an award, Alberto took the opportunity to thank the entire Genesal team of staff, and during his speech he also reminded the audience the importance of the role played by the Genesal R&D&I department, and that they are a key ingredient of the firms’ DNA.

The presentation was also an opportunity for the dean of the School of Engineers, Oriol Sarmiento to highlight the importance of industry especially “the quality and high level of all of the candidatures” presented.

An engineering centre, a training facility, bench testing areas, and a rain laboratory (the biggest in Europe) are just some of the characteristics of CETED which were evaluated by the jury when deciding upon the Galician Industrial Awards.

Genesal Energy continues to consolidate its standing in central America with...
Scroll to top
This website uses its own and third-party cookies to collect information in order to improve our services, as well as the analysis of your browsing habits. If you continue browsing, you accept their installation. The user has the possibility of configuring their browser, being able, if they so wish, to prevent them from being installed on their hard drive, although they must bear in mind that such action may cause difficulties in navigating the website.
SettingsAccept and continue
Cookies