The gensets manufacturer is looking to increase their turnover to €15 Million in this period. Investment in R&D will be €2.5 Million 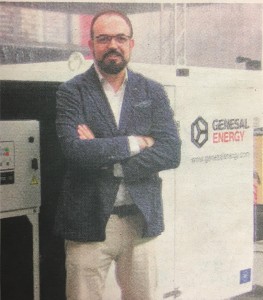 Genesal Energy plans to invest €2.5 Million in the upcoming period until the year 2021 on innovation based projects with aim of preparing the company for the future and stimulating higher growth. The amount to be invested is an increase of 80% on the amount invested in the last 4 years, which amounted to €1.4 Million.

For many years the point of focus for developments in innovation has been the responsibility of our Technological Centre for Distributed Energy (CETED in Spanish), based in the heart of our main head office. One of our key developments which became a reality in 2016 and will continue until 2018 with an investment budget of €1 Million is Pyrogaz (also in collaboration with Norberto and Allarluz). The aims of this particular project are to bring to reality a prototype thermoelectric generation system through the gasification of forestall biomass, and to install the concept in areas that do not have access to the mains electrical grid.

CETED Manager, company COO and Director of Strategy Julio Arca has confirmed that Genesal has initiated negotiations with other companies to form a consortium which would permit the development of a diverse range of innovative projects on the international stage. “Amongst the themes we are studying are digitalisation, cybersecurity, accumulation technology, and improvements for customers.” stated Mr Arca. He also highlighted R&D as one of the key elements that sustains the advances made by the company, whose turnover of €10 million in 2016 was an increase of 500,000 Euros on the previous year.

Within the company’s strategic plan which takes them through to 2021 is the objective to reach a €15 million turnover, which equates to an increase of 50% on recent performance, and of course to ensure that the business remains profitable. Strategy in this coming period also takes in to account the improvement of industrial processes, with a reserve of €1 million earmarked for development of their main plant in northwest Spain.

The driving force behind it all

Genesal Energy is made up of 3 businesses all based in Spain, and led by 5 dedicated partners. The business make up is: Genesal Energy the parent company; CETED, the Technological Centre for Distributed Energy; Generadores Europeos, the founding business with more than 23 years of accumulated experience, the main industrial arm of the business. The business has a strong international focus, accounting for 70% of genset sales. Exporting to over 30 countries, the company has 3 international branches in Peru, Mexico and Panama. In 2016 Generadores Europeos broke in to new markets in Croatia, Sweden and Qatar. New opportunities have also come from India and the Philippines. “The financial crisis [in 2008] happened when the company had already embarked on an internationalisation process by accompanying other Spanish companies overseas, and for this reason it had very little effect on us. In fact, it actually helped our growth.” Explained Mr Arca. Amongst their clients they can boast strong relationships with leading international companies such as FCC, Iberdrola, and  Carrefour, not to mention business relationships with Siemens and NATO.

The company employs 68 people, and in recent years has been behind a number of highly referenced projects, such as supplying power to the longest submerged tunnel in Latin America in the city of Coatzacoalcos in Mexico, supplying emergency power to the Machala Hospital in Ecuador and also support systems for a number of nuclear power stations. The breakdown of genset sales equates to 50% for turnkey solutions, 40% in standard gensets and the remaining 10% in maintenance and support contracts, an area which will play a key role in guaranteeing future regular income for the business.

Designing and supplying efficient energy for a Spanish paradise: The island...

Galician government Employment Secretary visits Genesal
Scroll to top
This website uses its own and third-party cookies to collect information in order to improve our services, as well as the analysis of your browsing habits. If you continue browsing, you accept their installation. The user has the possibility of configuring their browser, being able, if they so wish, to prevent them from being installed on their hard drive, although they must bear in mind that such action may cause difficulties in navigating the website.
SettingsAccept and continue
Cookies